Most of our patients have at least two or more symptoms such as lower back pain. See a more detailed list with descriptions of the symptoms at the bottom of this page. 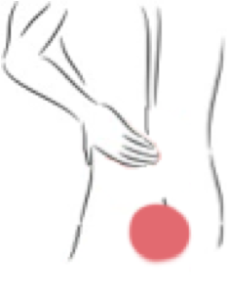 The perineum area located between the anus and the scrotum in men and between the anus and the vagina in women. The major muscles of the pelvic floor all attach to the perineum and it is one of the most common areas of pain in men and women who suffer from various forms of pelvic pain. Perineal pain makes sitting difficult and is sometimes related to post bowel movement pain.

The Wise-Anderson Protocol, popularly referred to as the Stanford Protocol on the internet, has been successful in treating perineal pain in selected women and men who suffer with muscle-based pelvic pain conditions.

PERINEUM PAIN IS BOTH A LOCAL AND SYSTEMIC DISORDER 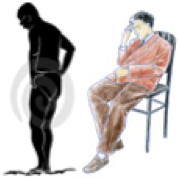 Perineum pain treatment and pelvic pain relief, with its often bewildering and troubling symptoms, is what those seeking help from any treatment are looking for when they go to a doctor. Conventional medical treatment, however, almost universally misunderstands perineum pain. The remedies it offers at best are partial and short-termed and at worst, remedies like surgical intervention or certain injections, can exacerbate the problem.

The fundamental error of conventional treatment for perineum pain is that it does not grasp the fact that it is both a systemic and local problem — systemic in that the nervous system, typically frequently aroused, chronically tightens up the pelvic muscles. It is a local problem in that chronic worry, anxiety and nervous arousal in certain individuals results in the local pain and dysfunction of the pelvic muscles. Without effectively treating both aspects, perineum pain remains.

Our 6-day clinic, offered throughout the year, is devoted to resolving both the local and systemic dimensions of perineum pain by training our patients in the most advanced internal and external physical therapy self-treatment (local treatment), and practicing our relaxation protocol, Extended Paradoxical Relaxation, which is aimed at reducing nervous system arousal daily. Pairing internal and external physical therapy remains a more effective perineum pain treatment option.

We began treating varieties of pelvic floor dysfunctions in patients at Stanford University in 1995 in conventional office visits. In 2003, we reorganized our treatment in a private practice in the form of a 6-day immersion clinic held in Santa Rosa, California. The clinic, limited to 14 patients and offered throughout the year, has evolved to implement the Wise-Anderson Protocol, a treatment to teach patients to rehabilitate the chronically contracted muscles of the pelvic floor and to reduce anxiety daily. The Wise-Anderson Protocol, done daily at home by patients we have trained in self-treatment, has helped to give many their lives back. The purpose of our self-treatment is to help patients become free from having to seek additional professional help. For over a decade, research has documented our results of training patients with self-treatment.

For questions about cost and eligibility please fill out the form below, email us at [email protected] or contact our office at+1 (707) 332-1492.

(Most of our patients have at least two or more symptoms)

WHAT TEMPORARILY CAN HELP: